Back to all posts

With tens of millions of UFO sightings in the U.S. and countless millions more throughout the world, the highly acclaimed book UFOS AND THE NATION OF ISLAM: The Source, Proof, And Reality Of The Wheels by Ilia Rashad Muhammad provides forthright answers to the modern UFO phenomena, highlighting the fact that Elijah Muhammad, leader of the Nation of Islam, introduced the reality of these wheel-shaped crafts to the modern world before any widespread reports, concerns, or investigations.

This research puts forth challenging arguments that offer substantial proof and documented evidence regarding the Nation of Islam’s (NOI) inherent relationship to the modern UFO phenomena—a proven relationship that has too long been avoided by journalists and researchers alike. This compendium of data answers what academics, theologians, and even UFOlogists have deliberately avoided. Why did the U.S. Government arrest Elijah Muhammad shortly after they encountered a huge circular UFO in 1942? How is it that Minister Louis Farrakhan has boldly and continuously challenged the world to disprove the Nation of Islam’s connection to these wheel-like crafts and no one has challenged him, not even his staunchest critics? UFOS AND THE NATION OF ISLAM addresses these and several more questions about the UFO Phenomenon that others have failed to address, using the most reliable primary sources regarding the topic of these circular UFOs.

As mainstream depictions promote that UFOs are of extraterrestrial origin, this idea has never been grounded in evidence. Hence, this book challenges and debunks common misperceptions about UFOs with highly reasonable, incontestable evidence, leaving no room for even the staunchest critics to doubt.

Comprised to offer clarity for those who already acknowledge the existence of UFOs, UFOS AND THE NATION OF ISLAM also provides a clearly documented, easy-to-follow prose for the skeptics. The incontestable data makes it practically asinine for any reasonable thinker to negate the source, proof, and reality being presented. 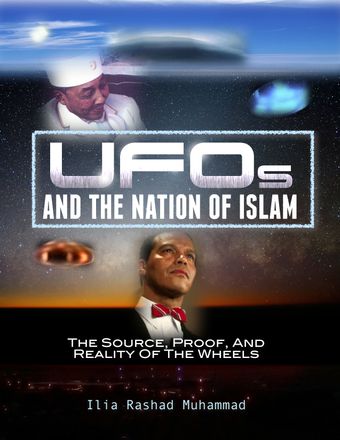 Listed below are a few brief points of interest that UFOS AND THE NATION OF ISLAM: The Source, Proof, And Reality Of The Wheels explicates: